I had an encounter with some cows, internet, and it was not pleasant. 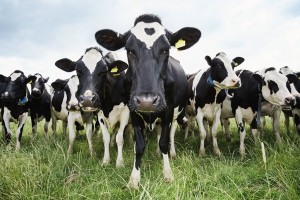 Cows are domesticated, docile creatures. That is what I thought, when I decided impulsively to walk through a field of them this morning.

I had been walking for a good hour and a half, and the field was a shortcut back home. The cows were all crowded by the gate, and they all turned to stare at me when I walked through. They had yellow tags on their ears with numbers on them.

They gathered closer to me as I walked, following my movements.

I stared at them, stock still. The clouds were heavy in the sky. The wind hustled the grasses this way and that, sending ripples through the wavy stalks. And the cows were silent, their eyes on me. All of them. It was like the silence of an impending doom

Ain’t nobody got time for that!

I noticed the calves grazing calmly in the distance. Perhaps they were being wary.

Nevertheless, I did something really stupid, folks. I made a sudden leap towards them, thinking that perhaps if I established my dominance they might take heed and move on.

They leapt back, sure enough, but then they leapt forward, all crowding closer towards me.

I was ab-so-lutely terrified. What had I unleashed!?

They ignored me, and carried on staring.

So I ran. I don’t know why I ran. I wasn’t scared, I was just trying to get out of this situation as quickly as possible.

I got away safe and sound, though, disgruntled about having to go the long way round. But the countryside was glorious, the wind was strong, the clouds heavy and there was a wondrous light rain sprinkling my face. All was well.

I don’t know about those cows though. Perhaps if I had been less afraid, and more gentle, I would have been home sooner. But would I have been alive? Who knows.

Do you ever wonder why you are walking somewhere.

Watching the clouds scud by, or the rain bounce off leaves and splatter onto the ground, or the trees swooshing in symphony, wind rushing through their tops, transporting you to an entire new universe of sound, of hugeness, a feeling of being quite small against the forces of the world.

Sometimes it will be a vast Arabian desert flying past the dusty windows of a Chevy Suburban, patches of sparse, pale green scattered here and there, camels breaking the dead heaviness of the summer heat, their shadows stark and black against the vivid orange sand.

Sometimes it will be the blank wall beside your bed. You will notice the little holes left by the paint bubbles from the last hurried paint job. They look like the craters you see on drawings of the surface of the moon, only these are smooth, more refined. You might see ancient drawings, done in faint pencil, small bows and flowers and little anime figures. You may notice the paint bumps that always cover painted walls, and then as your eyes focus in and out of concentration, you will finally see the faces.

Shocked, your raging thoughts will fade for a while as you try to connect the funny shapes together, your fascination awakened as the details begin to emerge. Look, you think, a pretty girl. Oh no! Oh dear, it’s a deformed old man with a large nose. Now it’s a baby in a cradle, a man in tails with a crocodile face, a boy with crazy hair.. then your eyes start to wander and discover faces in everything else, the curtain patterns, the carpet, the folds in the quilt. Very soon, however, your interest wanes. You are weary of seeking out faces. Your thoughts, which were a faint, crackling background murmur, suddenly surge in volume, clamouring for your attention, grasping at your emotions.

You know, dearest reader, that you are an entire universe within another universe containing 7 billion other universes just like yours, but also very different from yours? You have your world, and your world looks just so, to you, and you walk about, meeting folk, thinking things, all the while assuming that your world is the same world as everybody else’s.

“Our world,” you say solemnly, a mug of steaming coffee in hand, “is in dire need of a makeover.” And you take a sip, your eyes watching your conversation partner as they respond.

You say ‘our world’ as though you see identical terrains.

They’re not, though, are they? Each and every one of us is seeing things through the screens of our own personal universes.