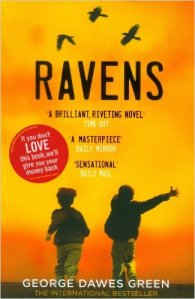 Ravens was interesting enough to keep me hooked until the end, but it was harsh edged and implausible, and left me with a very bitter aftertaste.

I regret reading it. I regret picking it off the shelf at British Heart Foundation. The only good thing to come out of that was £2 towards the Heart Foundation, and perhaps another book to add to my meagre 2015 reading challenge. Except am I really proud to have this book listed as an “accomplishment”?

If you are looking for a book to better your soul, increase your intellect, add to your knowledge and make you happy this is not it. This book is grim and depicts a sordid reality which is unbelievable.

I just didn’t buy it.

I didn’t buy it when Shaw fell asleep and the Boatwrights didn’t try to save themselves. I kept thinking, but this whole plot would fall to pieces if the characters did what any real person would do! What any literary person would do, let alone real person.

I didn’t buy that every single soul in the town was dimwitted enough to fall for Shaw’s ‘charm’. People aren’t like that these days, unless they were all naive and dull. Which again, is implausible.

I didn’t that Patsy was selfish enough to surf for mansions when her children and husband had their every move watched by the cold barrel of a gun.

I didn’t buy that Mitch gave up his furious fight over a meagre chew of ‘holy’ bread. That he fell for Shaw’s charm only second after passionately despising the fellow. Sure. There must be crazy people like that in the world but this whole damn town was crazy. Unreal.

I give the book 1 star because stars signify good things and the only good thing about this book was the writing. Green managed to keep me interested, if not invested. I was genuinely interested to know what would happen, who would pull the trigger, who would make off with a Malibu mansion or a jet ski or a never ending vacation with their lunatic, batty, smitten friend and partner in crime.

The characters were distinct, although not well-rounded enough for me to be concerned about their fates. Certain characters did stick out however, perhaps because of how bizarre they were. For example Shaw and Romeo were so unlike anybody I have ever come across, both in the literary world and the real one. They were like two overgrown children, men whose brains hadn’t matured beyond the age of twelve or thirteen. The other was Burris. Now he struck a chord within me, the sad old jowly fellow. Will I remember this book with sunshine and joy, as the peaceful sunset of its cover suggests? Certainly not.

But I will say that George Dawes Green writes impeccably, brilliantly, and if there is another book by him I might be willing to try it, because surely such brilliant writing cannot be wasted on trashy people and their unrealistic issues?

4 thoughts on “Ravens: A Review”