When I was nine years old I wrote a poem, for a girl called Lilly. I put it in her pocket while we were waiting in line for PE. She smiled at me, not noticing what I had done, and when she went home her mother washed her dress and she never saw it.

When I was eleven we sat next to each other in science class and dissected a frog. She turned to me afterwards and stared solemnly with her large brown eyes and said,

When I was sixteen, I caught a bus because I saw Lilly’s heavy brown hair hanging over the side of her shoulder as she slept against the window. I stood at the front, holding the rail, as the bus tilted her head this way and that, her cheeks flushed with exhaustion. On her lap was a pile of books about brains and bodily functions. I got off before she woke up.

When we were both seniors about to apply for university we sat in the darkness of an alcove at prom night and she told me she wanted to save people.

I told her I wanted to fix things.

She leaned over and put her soft cheek, faintly sprinkled with fine glitter, on mine. I closed my eyes. Her scent was cinnamon and chocolate.

At university there was a girl called Lilly. She wasn’t my Lilly. She was loud and brash and fainted at the sight of blood. Her hair was bright red, and her face was tiny and pretty and she knew it and flaunted it, which isn’t a bad thing at all, but it made her a little arrogant. Still, I kissed her one night, and then carried on kissing her at different intervals, very frequently, for eight months, before I found her behind the medical building in the arms of a hunky athlete.

While I was a student doctor at age twenty, injecting needles into the hands of outpatients I saw a flash of long brown hair passing by the waiting room but couldn’t run after her because my hands were tied. My heart picked up pace and my hands were unusually shaky. Was it even her? I don’t know. Maybe I just desperately wanted it to be.

I got married to a Lillian when I was just twenty one. She had a short blonde bob and a sharp little nose. She was a nurse practitioner and I was a student doctor. We rarely saw each other and when we did, we had only time for passion. Perhaps that was why our marriage lasted for three years. When we finally came home one day and kicked off our shoes and sat down to dinner, we realised we didn’t know each other, and what little we did know didn’t entice either of us to know any more. So, very amicably, Lillian packed her bags and flew to Tanzania where she did charity work in a hospital. She sent me so many postcards, and sometimes called, her voice fuzzy and broken up by thousands of wires over thousands of miles of desert and sea between us.

When I was twenty five, I was a doctor. I worked in the emergency department and I fixed people as best I could, holding their limbs together and picking out tarmac from their fractured skulls while their mothers and spouses and siblings sobbed in the waiting room. Sometimes they were wheeled away from me, my hands bloody, a sheet laid gently on their faces, and when I got home I lay under the hot water of the bath with my eyes tightly shut and suppressed my emotions.

I want to save people.

I want to save people.

When I was twenty six it was 2am. I sat on a plastic chair with my head in my hands and stared at the pale green floor under my shoes. There was shouting around me, suddenly, and I heard my name being called urgently and when I stood up they were wheeling her in. Her face was deathly pale against the pillow and her small mouth was turned downwards, her thick brown hair spread around her. She looked like an angel, except for the mangled way her tiny little limbs were spread out and the heavy bloodstain on the front of her small little dress. Her father was frantic beside the stretcher, his own face speckled with blood, and the nurses were trying to push him back but he was heavy and strong and there was anguish in his teary eyes.

They led him out, consoling, calming, holding his back, and we began to defibrillate her small fibrillating heart. The beeps on the machine showed that she wasn’t responding so we tried again, and again, and again and again until the room swam around my head and we had to pull yet another sheet over another child’s face, inhibited with but not alienated by the icy stillness of death.

I’ve learnt you can’t always fix people, and you certainly can’t always save them, and sometimes, you can fix them but can’t save them.

My heart had hardened a little. It had to. I had no other choice. I came in to work, I pushed and I stitched and I clutched lives by their final threads, pulling them slowly, gently backwards, careful not to tear them and in doing so rip apart so many people’s lives, then I went home and soaked my body in hot water and socialised and visited my family and laughed and joked and blotted it all out.

When I was twenty six I was full of hope but also aware of grim reality. So when I saw her, her hair pulled up and away from her gentle face, a white coat on and a clipboard in her hands, following another doctor down the corridor, I didn’t chase after her or slip any poems into her pockets as she passed me by so closely that I got a whiff of cinnamon and chocolate. I watched her walk slowly away, my hands buried in my pockets, exhaustion making my vision tinged with red, and I turned and went back to my reports.

I don’t know if you know, or even if you remember me, but throughout my years, you have helped me grow.

End note: The painting below is ridiculously stunning. The level of skill in those paint strokes are making me sick with envy. I can’t believe it, can you? I want to learn to create stories like that with paint. Check out more of Leonid Afremov’s work following the link below, if you like. I don’t know who he is but isn’t his name so gloriously romantic? His painting inspired this story. I hope he doesn’t mind me using it on my blog. 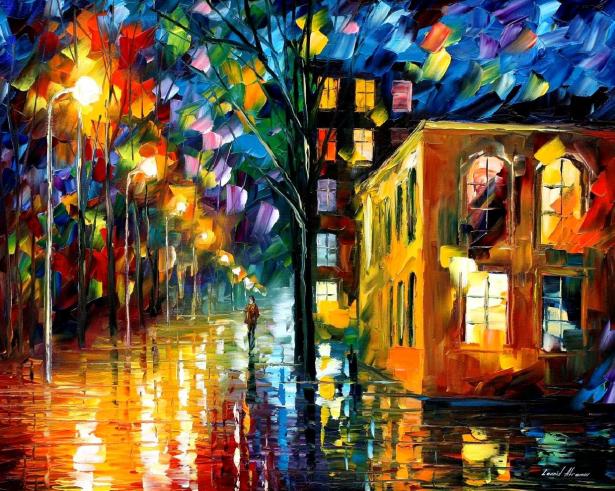 Only Love by Leonid Afremov