When I was studying my Creative Writing module, as part of my English Language and Literature degree, my tutor spoke about a feature of writing that incorporated film techniques. She tried to make us incorporate some of these techniques in our own writing, and cited the example of Charles Dickens’ ‘Great Expectations’, where the visual descriptions of Pip’s parents’ graves provide vivid imagery, almost like a camera panning out over the gravesite and then the view of the countryside spilling over the hills.

But that was where it stopped with Great Expectations.

And if you want to read a book that makes you feel like you are watching an emotive film, not just visually, then Idaho is the book for you.

Emily Ruskovich has a natural affinity for words. Her words are like vines, growing around the pages and entwining with her story, so they cease to be black letters on a white page, and instead become a blurred window into her motion picture.

She doesn’t just describe things, she adds a voice to them, increasing the volume when she needs to and beaming radio silence when the moment shouts for it. And what a loud silence it is.

And behind everything is the soft piano music, gently playing to the rhythm of the characters’ lives and they go forward and backward in time.

It is all very well for me to lament on the poetic nature of Ruskovich’s writing, but I expect the burning question you have is what is this book about?

And I shall tell you, and not tell you, all in one breath, because I can’t tell you what it is about without doing the book justice.

It’s about a family, both past and present, shattered by uncontrollable and controlled, horrific events, and a degenerative disease. It is breathtaking, yet slow paced. And it rises and rises in pitch as the book goes on, crashing loudly and beautifully at its highest peak, and then softly trundling down a rocky mountain towards the end. Ruskovich uses her writing talent to create a written film, and I mean this quite literally.

It took me three months to read this book. I know because I started it when my tulips started to sprout, and finished it today, when my tulips are long withered away and the summer flowers are in full bloom. It is a slow read, there is so much to take in, and the pace leaps about between timelines, so it is hard to keep up. I was also left frustrated at the end, because there were questions there that I felt weren’t answered sufficiently.

I sat back and thought about that, however. The book was written in such a way as to reflect real life themes, emotions and human growth and change, and in real life there aren’t always answers, there are only humans dealing with questions, and growing with them, until they become part of what defines us.

I thoroughly was mesmerized by Idaho, Emily Ruskovich ensnared me with her beautiful poetic prose, she flabbergasted me with how she dealt with such treacherous topics and yet managed to make something so vibrantly, painfully beautiful. 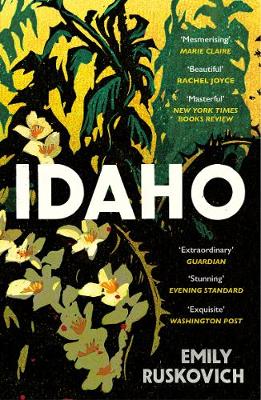