We have had a week of GLORIOUS weather in the UK.

Glorious. adj. having a striking beauty or splendour.

I wish you could see it. See the sun bring out the greens of late summer, see how it coaxes the fragrances from the late September flowers, see how it shines on gentle webs, creating a kaleidoscope of colours that shift up gossamer threads as the sturdy little arachnid home sways stubbornly in the wind. I wish you could smell the earth, it’s like the spring of winter. Everything is so fresh, idyllic. Things have bloomed past their prime, and they nod in the breeze with unwitting splendour.

And the sun is warm, caressing, in the cool, sometimes cold, breeze.

This is my favourite season, just before the trees deck themselves in the sunset colours for the evening of summer, just before the bare branches begin to peer over the haze of icy morning fog. The evenings are still lasting, the shadows still long at 6pm, the golden sunshine can still be called a late summer sun.

There was a strange, still emptiness in the room. Something amiss. Shrouded in darkness, wrapped in the cocoon of her duvet. A small light filtered in through the gap in the curtains, it appeared to twinkle. Oddly comforting, like a lighthouse. A beacon in the dark.

But what was missing?

It was chilly. Drafts wafted under the gaps in the door and through cracks in the floorboards. She was not used to this, of-course, but the hot bricks by her feet and the layers of blanket snug around her body kept the warmth on her; only the tip of her nose was icy.

That was not it, though.

She closed her eyes. Sleep evaded her that night. Her first night. A shiver ran down her spine, of excitement, anticipation.

A long voyage over seas and land, through changing climates, meeting wonderfully odd folk. Folk from forest and desert, rich folk and poor folk, scroungers and generous benefactors. Chums, and motherly matrons. She thought of all the personal cards she had stacked so carefully in the writing desk they had put in her room, what a pretty desk, such ornate inscriptions, and what a lovely set of paper and pens left for her to use.

She was simply exhausted. Her bones felt leaden, her neck ached from months of travel, and yet, that evasive slumber!

WHAT, oh, what was missing?!

She thought of home. Of her mother laughing, her singing loud and warbled, in tune but not in tone, but her song much loved, much adored, and so, oh so taken for granted. She thought of her father, hammering away at the cracks in his home, restoring and fixing in his free time. He adored his children, and worked so hard for them. His beard was speckled with white, and wrinkles formed intricate webs around his kind eyes. She thought of what she had left, and a lump grew sturdy and strong in her throat, stubborn against her swallows. Her house on the little hill, the beach just a few metres down, and always the sound of waves crashing against the shore.

The sound of waves lulling her to sleep like a soothing lullaby.

Angry waves in the storm, gentle waves lapping against the sand, up and down the shore, sunrise and sunset and vigorous, tropical rain. Incessant, rhythmic, comforting. The one constant in life’s ever growing, ever changing flow.

Slumber finally crept around the door, seeping into her room, her mind filled with the sound of the sea. 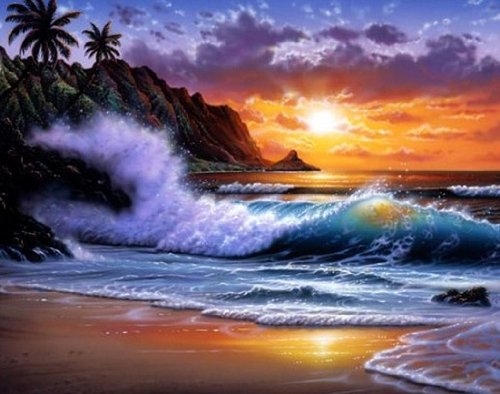