Walking down the street with his hands in his pockets. He always cleaned up so nicely. His hair slicked back, his face tidy and trim, his suit brushed and straight with the crease in the trousers, shoes shined up to perfection, like brand new, reflecting the street lamps in their gleaming glory.

The pavement was shining with the mist of rain that floated down upon the town. Heels clicked and shoes scraped with the faint gravelly echo of damp street sand. The evening twilight descended upon the world, combining with the golden glow of the street lights to create a surreal dusk stillness, when the streets emptied and families sat around dinner tables, and shops were empty and dark behind their shutters because shop keepers had long gone home.

I stared. Thomas? No. It could not be. Impossible.

He whistled a little as he walked, his step jaunty, and my heart ached. I loved his whistle, his cheery, melodious tunes. His whistle meant he was happy. He turned quickly into an alleyway and vanished.

I peered into the darkness of the alley, squinting a little. It was like a cavern, swallowing up all light, so I couldn’t make anything out. What was in there? Should I follow?

My footsteps sounded loud on the pavement, so I bent over and slid my dainty heels off, holding them by the straps by my side. I followed him.

I froze, my toes curling inwards on the cold, damp concrete beneath me. My eyes focused in the gloom; the brick walls on either side of me were illuminated by the faint lights out on the street; they were glistening.

His voice was so clear, as though he was standing right next to me.

‘Thomas?’ I said again. The whistle sounded again, even fainter, and I knew then that the voice I had heard could not have come from Thomas, his whistle was too far away. Or was it?

I jumped. It sounded right in my ear. I looked around frantically; nobody. Nothing. Just the damp concrete and the strangely glistening walls. My heart beating wildly, I tried to shake off this panic that rose within me like bile.

There is nothing to be afraid of, just carry on, it is not real.

I could not do it. My fingers clutched my shoes as I turned and raced out of the alleyway, the long rectangle of light from the street ahead of me looking so far away, every hair on my body standing on end, screaming at me to go faster faster get out of here before I am grabbed.

Finally I burst into the light, as a car sailed past me on the road. A gentleman walked across the street, head cast downwards. Lights twinkled at me in the shiny, shiny, post-rain twilight world.

I glanced behind me and shivered as I walked hurriedly, still barefoot, along the pavement. It was not Thomas. It could not be Thomas. Not my Thomas, at any rate.

It was not real.

I write you from the depths of this ship. My cabin is fairly tight, four beds confined to a space not even wide enough to fit my length. But it is alright, the boys are friendly, we all await the end of our journey nervously. What will the war hold in store for us? I have spoken to some boys who have already been on the front line. They are cagey, and I heard one telling the the lieutenant that it was hard to remain cheerful about it all. I know they don’t want to terrify us with horror stories, and so we carry on. The closer we get to our destination, the more sombre everybody becomes, but we mask it with our jokes and tales of women and joy, and we smoke and smoke and smoke. Write me, Amelia, keep me updated, all the time. Fill your pages with tales of home. 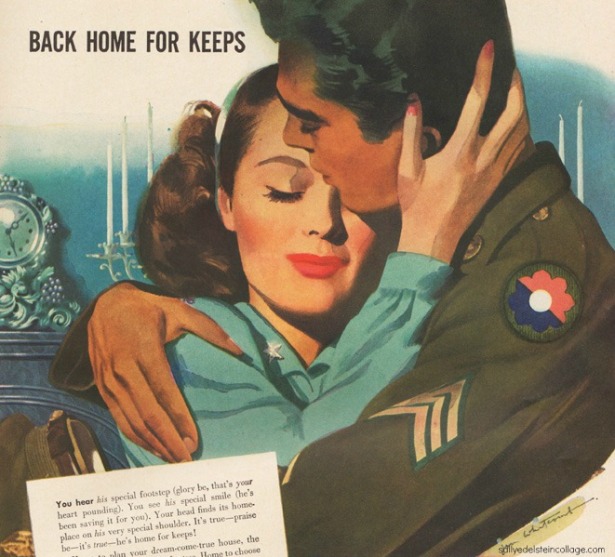